Does this woman need an introduction?  We are talking about the actress from The American Pie Trilogy, she had roles in The Big Lebowski, Urban Legend, Cruel Intentions, Van Wilder and most recently Sharknado.  Folks, we are talking about Tara Reid.

I take you to August 5th, 2013, 5:30 pm my cell phone alarm goes off and wakes me from a nap.  I spring out of bed to make some coffee in my modest West Hollywood kitchen.  I barley napped, I couldn’t clear my mind in anticipation for the chance of coming in contact with Tara Reid.  The Sharknado premiere was at 9pm at the LA Regal Cinemas.  I knew if I arrived early I could stand aside the red carpet to get my glimpse or maybe even more of Tara Reid.

My outfit was planned; off-white suede Hush Puppy shoes, dark Karl Kani Jeans, a sweet ass Ben Sherman button down, and a JanSport Fannie pack to hold my stuff.  After my shower I even brushed my teeth, I normally don’t because it’s a waste of time and people can’t really tell if your teeth are dirty because they are in your mouth.  I grabbed my house key eyes and headed to the door.  Opps I forgot something, the most important thing of all, my bottle of CK1 cologne.  This wasn’t just any bottle of cologne, this bottle had the goods in it.  I even burned the nozzle’s hole so when spraying it would shoot farther.

A prearranged cab arrived to my place around 6:15.  I didn’t want to drive my own car and deal with LA traffic, I just wanted to sit back and free my mind before my big moment.  The cabbie took The Santa Monica Blvd to the 101 South.  There was no traffic, I thought to myself “this must be my lucky day”.  I arrived to an empty red carpet around 6:45pm, fifteen minutes ahead of schedule.  Prime picking to get in the best spot, the majority of cameras set up shop towards the north side of the carpet near the theater entrance.  I knew Tara was bound to stop here and flaunt, so I claimed my territory.

9:00 pm – The red carpet is buzzing, there are enough people.  Not a lot.  Mostly freaks wearing shark costumes.  No sign of any celebs yet except for former 21 Jump Street star Richard Grieco.  Then all of a sudden a limo arrives and outcomes Sharknado stars Ian Ziering, Cassie Scerbo, and most importantly Tara Reid.  They must have pre-gamed together.  Reid was wearing a delightful peach pink dress. 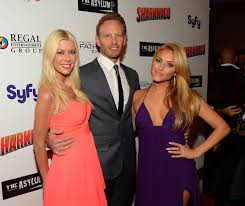 When friends ask me “why’d you do it?”  My response is always the same – “Because I love her.”